Staff takes pride in solving problems day in and day out

Happy people don’t call help desks. But if Scott Lloyd has his way, people are happy by the end of the call.

For the past 11 years, Lloyd has overseen the University of Utah’s campus help desk and various other call-center services. He understands that when someone calls the 16-person desk they expect a problem to be fixed quickly. But there’s more to it than dispensing technical advice.

“We look for job applicants with a customer-service focus first, and then technology experience,” Lloyd says. “A lot of times we can teach them the technology. Customer service — that’s what we look really heavily on.”

The help desk, situated alongside the University’s hospital service desk in 650 Komas, handled just shy of 40,000 incoming calls last year. Four full-time staff members and a dozen student employees answer calls, troubleshoot users’ IT issues, and open trouble tickets and work orders. On average, the caller was speaking with a live agent within 22 to 30 seconds.

Steven Maloy — a Tier 2 support agent who handles calls escalated from the initial Tier 1 agents — knows all too well how frustration and impatience can mix to create a perception that works against the organization.

The help desk keeps meticulous statistics on incoming calls, first-call resolutions, average calls per agent per shift, speed to answer, abandoned calls, and the like. It also collects data from surveys sent out after each ticket closes, asking people to rate the quality of help
they received and their overall experience. Lloyd meets with Maloy and Beth Sallay, a Tier 2 agent with more than 13 years of help desk experience, weekly to review the stats and ensure issues are documented and resolved.

As UIT adopts a new service- and incident-management platform, Lloyd is excited about the ability to track the desk’s progress in even more ways.

“It’s got a lot more reporting; it’s faster. I think it’s going to be a lot more useful for my group,” he says.

It will also allow customers to track their requests through the process in a more transparent way, hopefully alleviating some frustrations within the current system.

A shifting user base

Like every other area of information technology, the support function has had to adapt to the sea change of users’ abilities, devices, and expectations. Where a decade ago dozens of students would line up to get their desktop towers configured to connect to the network, now people are mostly concerned with connecting peripheral devices. Desktops gave way to laptops, which have ceded to tablets and smartphones. 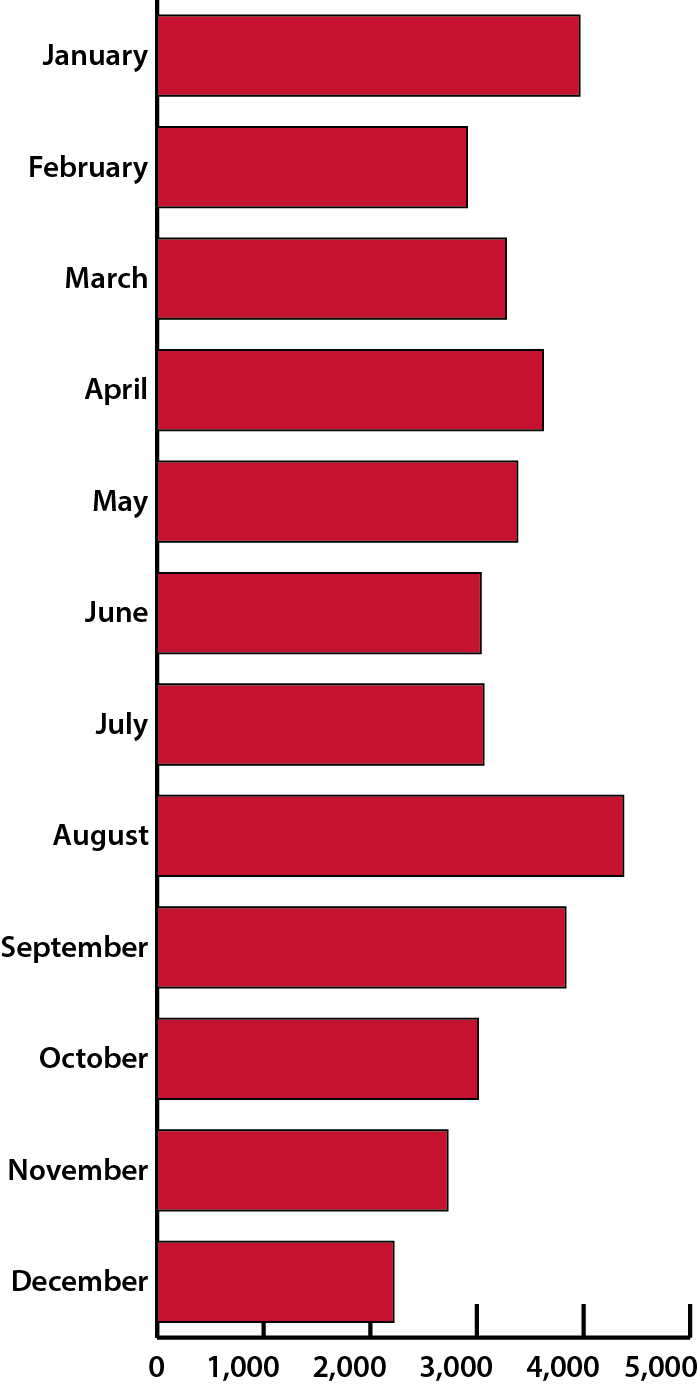 “Students receive all of their papers from their professors online, they gain access to all the library resources online,” Lloyd says. “They have to be connected to it. It’s critical to them.”

Sallay says the help desk agents are friendly, and they can relate to users’ problems because they have been there themselves at times.

“Whatever they’ve done, I have probably done something way worse that caused more problems,” she says.

Maloy has been with the help desk for more than five years, starting as a first-line agent before moving to the second tier about a year ago. The U graduate has a degree in business information systems and has been at the school off and on since 1992 (in fact, his dad was an accountant in continuing education from 1980 until he retired a few years ago).

“It’s rewarding to be able to help people,” Maloy says. “They call in needing help, and we’re able to take care of them and get them on their way. They’re able to get back to their classes or their work or whatever they need to do. They’re appreciative of it, and you feel good being able to do that. And it offers a challenge. All day long you’re being handed problem after problem.”

The help desk agents have access to the same knowledge database as is available on the UIT site, but also have some internal resources that go beyond those available to the public.

Another change is that students coming in are even more acquainted with technology than their predecessors.

They are less likely to need assistance for some of the more basic issues than in the past, so a good deal of the support resources is focused on faculty and staff who have issues with calendar sync, phone repairs, server support, or DNS configurations.

A culture of service

The help desk is staffed 24 hours a day thanks to a partnership with the Downtown Data Center to cover off-peak hours. During particularly busy periods, such as the beginning of the school year, the average agent handles nearly 50 calls in an eight-hour shift.

That’s a tough job, and one that requires extensive training to get right. Sallay, who has a bachelor’s in communications and a master’s in instruction design and educational technology, has worked hard to get much of the basic training put into Canvas courses.

“Turnover is the most challenging issue right now,” she says. “That’s why I did the online training. We’re training all the time.” 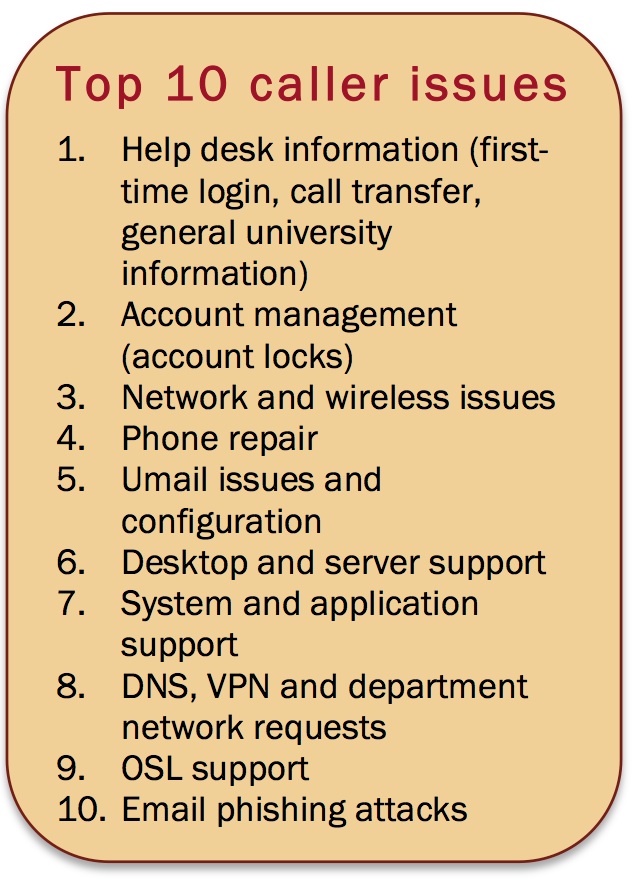 Maloy works closely with new student hires for about two weeks, teaching them the ins and outs of good service and solid technical help. It’s not for everyone.

“Some won’t last two weeks,” Maloy says. “I think those who drop out within two weeks or shortly thereafter are the ones who have an expectation coming in that they’re going to be kind of a glorified data-entry person just transcribing the phone call into a ticket and they’re done. When we start going through the training and they start to see really how much we do here at the help desk, they kind of get overwhelmed with it.”

Sallay appreciates the flexibility of the student workers, who help cover parts of a shift that might be understaffed otherwise. The ones who come out of training tend to stay about seven months in the 19-hour-a-week job, though a few will stay as much as two years.

“For some it depends on their schoolwork,” Lloyd says. “Some will balance it out, and others will say, ‘You know what, I just have to focus on this schoolwork full-time.’ It just depends on what field of study they’re in.”

But he is proud of the work the students do and is happy to help bring them along in a professional setting.

“They’re working in an area where it will help them build their resume,” he says. “They’re working with a large group that has all sorts of parts and they may never have been able to do that before. We’re pretty well an enterprise application group and a networking group. So they get to see all those pieces and work with those groups, too.”

Whether it be a student employee or a frustrated caller, Lloyd wants the same outcome: When someone finishes with the help desk, they are in a better place than when they began.