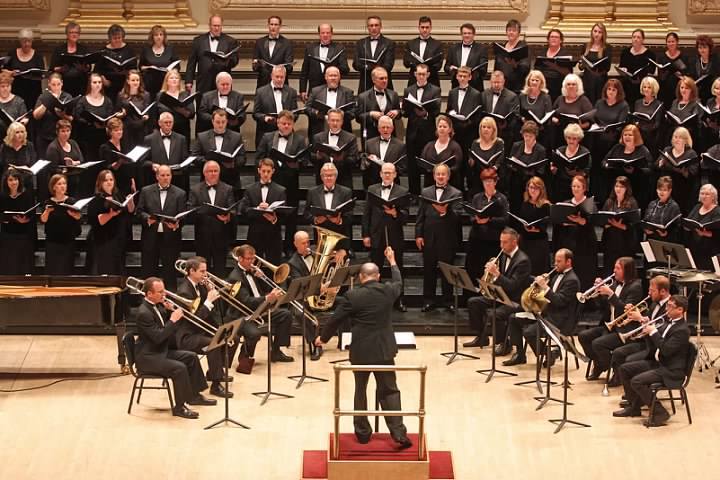 Craig Bennion gazed up from the New York City sidewalk, taking in the historic façade of the historic Carnegie Hall. The front of the world’s most famous music venue was clad in scaffolding in the midst of renovation — not quite the stately majesty he had pictured.

No matter. The front entrance wasn’t for him, anyway.

Performers enter through the back.

“Entering through the backdoor was a cool experience — not something just anyone gets to do,” said Bennion, who oversees change management for UIT’s Common Infrastructure Services.

Bennion traveled to the Big Apple with Utah Voices, a choral group he joined five years ago as a founding member. Its director, Michael Huff, is heralded throughout the industry for a variety of talents — including directing and producing college football’s Liberty Bowl halftime show for a quarter of a century.

“With Michael’s connections in the industry, he’s really been able to provide some experiences that just normally don’t come to most choirs,” Bennion said.

Two years ago, Utah Voices played the Lincoln Center for the Performing Arts just a 12-minute walk from Carnegie. That performance led organizers to reach out to Utah Voices for the June 22 show at the hall.

Since its construction in 1891 by philanthropist and industrialist Andrew Carnegie, the venue has boasted a who’s who of musicians: Dave Brubeck, Duke Ellington, Stevie Ray Vaughan, The Beatles, Chicago, The Beach Boys, The New York Philharmonic, and thousands more. As evidenced by the current renovations, buildings with such history sometimes show their age.

“It’s an old building filled with character,” Bennion said. “The character shone through that day because the backstage elevator was broken and we had to hike up five flights of stairs to our rehearsal hall on the sixth floor. We did that five times over the course of the day.”

The singers had rehearsed for eight weeks prior to the show, but its first practice with the instrumentalists accompanying them was that Sunday morning the day of the show. Talk about pressure.

“Walking on stage the first time for me was exciting and intimidating. Here I was at Carnegie,” Bennion said. “Looking out over the hall, seeing the sea of empty red seats on the main floor and balconies gives a different perspective of what’s about to happen. It’s calming and exhilarating at the same time.” 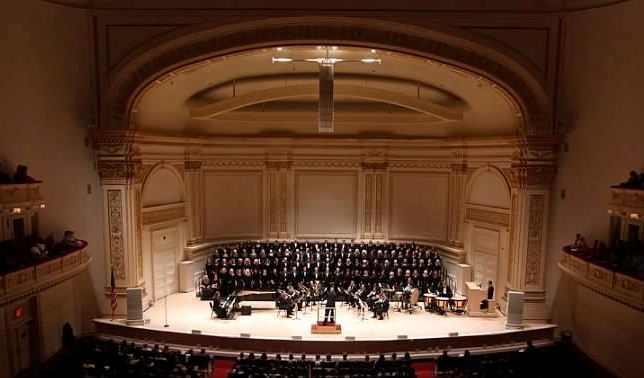 Utah Voices shared the bill with two other choral groups. Its portion of the program was titled “Hometown Praise” and featured music either composed or arranged by Utah artists, including “Prayer of the Children” by Kurt Bestor, “The Lord’s Prayer” by Leon Robertson and excerpts from “Promised Valley” by Crawford Gates.

Bennion said the hall’s acoustics were quite different from other venues in which he’s performed, such as the Salt Lake Tabernacle, where every sound is amplified and reverberates throughout the building. In Carnegie, his bass voice would project outward, but nothing would come back — there wasn’t much to go on to know how the group sounded to the audience. The answer: wonderful.

“The large choir … was perfectly prepared, in tune, with rich full tone that could produce a thrilling forte or whisper more confidentially at the softer dynamics,” wrote Frank Daykin for New York Concert Review. “If you think ‘Utah choir’ means only the Mormon Tabernacle Choir, you need to hear this group.”

That’s high praise for a walk-on, non-auditioning choir that tops 160 members at its peak, and “makes what we did probably all the more remarkable,” Bennion said.

He encourages anyone who wants to join or just catch a performance to come out. Information about the choir can be found at utahvoices.org.

Whatever the interest, Bennion can assure a great time.