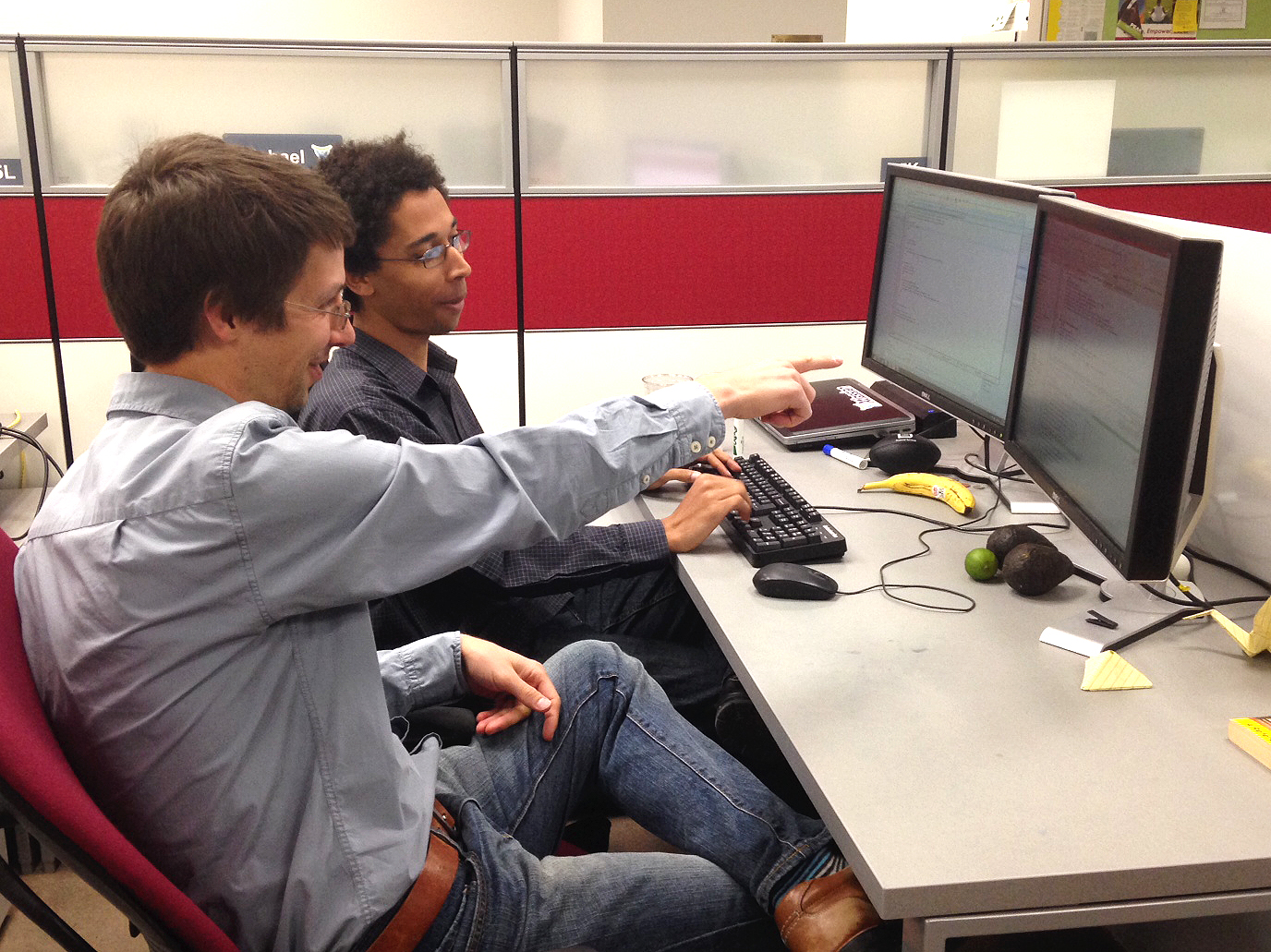 Sitting two programmers side-by-side to work on a single project may seem a little strange at first, but for a couple of programmers in University Support Services (USS), it’s the new way of getting projects done.

Mathew Edgren and Michael Morris-Pearce, software developers for USS, started experimenting with pair programming in February of this year after Instructure's Joel Dehlin mentioned it in his talk during the All Hands Meeting.

“It was something I wanted to do anyway,” said Edgren. “It certainly got me more excited about it.”

They’ve started out sitting at one computer with one person typing, and the other person observing and giving input. After a while, they rotate.

The two are hoping to move up to using a second keyboard in the future – which would allow one person to type code, and the other person to do research.

Currently, the two work on a task-by-task basis, programming together as needed to get a project completed.

“If you’re doing something really trivial, you don’t always go and grab someone and say ‘I need to change this text,’” said Edgren. “It’s essentially for anything that’s not trivial.”

The results of implementing pair programming have been mostly positive thus far.

It also helps prevent programmers from going down the “rabbit hole” that can tend to happen when working solo.

“It’s helpful to have somebody to pull you back and another set of eyes to actually determine whether that’s a good solution or not,” said Edgren.

Edgren and Morris-Pearce have found that pair programming isn’t something that can necessarily be done all day, every day, even though that has happened a few times.

“The time tends to fly by,” said Morris-Pearce. “You’ve got someone else there keeping you on task. Before you know it, you’re beat.”

“You’re essentially constantly engaged with somebody,” agreed Edgren. “It starts to get really tiring.”

In some ways, however, pair programming can actually alleviate stress.

“If you’ve got some task you have to work on or a brain teaser to figure out, sometimes it’s just nice to pull someone in and say ‘hey, help me figure this out,’” said Morris-Pearce.

USS manager Doug Kenner hopes to encourage his team to engage with pair programming as much as Edgren and Morris-Pearce have.

“It’s just a better product,” he said. “It just seems like the end result is better.”