But — like aliens or Bigfoot — that doesn’t mean it doesn’t exist.

In fact, Post’s love for Halloween can be measured in hours (sometimes more than 200 a year) and yards of fabric (15 once for a steampunk skirt and bustle). Neither, however, fully describes the effort the senior product manager puts into preparing for the most fantastical night of the year.

For 20 or so years, Post has poured countless hours into designing and crafting outfits for the annual Hilton Halloween party she attends with her husband, Tom. The legendary family fete, hosted by an uncle, includes a costume contest and a “Fear Factor”-style competition.

And Post isn’t being modest. The “Fear Factor”-style competition challenges guests in all sorts of timed quests for which they earn points. For instance, Post once was “locked in a coffin with chains, and my husband, who was blindfolded, had to break open pumpkins until he found the key and could unlock me.”

Winners take home big rewards — like a night in Park City or an all-expense paid trip to Disneyland, where her uncle is hosting the party this year — not to mention epic bragging rights.

While the Posts have claimed victory in the competition a few times, the costume contest is their wheelhouse. The couple, who are high school sweethearts and have always been involved in theater (Tom’s an actor), have won 15 times in the past 20 years. But it took losing as Tigger and Winnie-the-Pooh the first year to really kick-start their competitive spirit.

“When we saw everyone's costumes, we realized we've got to step up our game,” Post said. 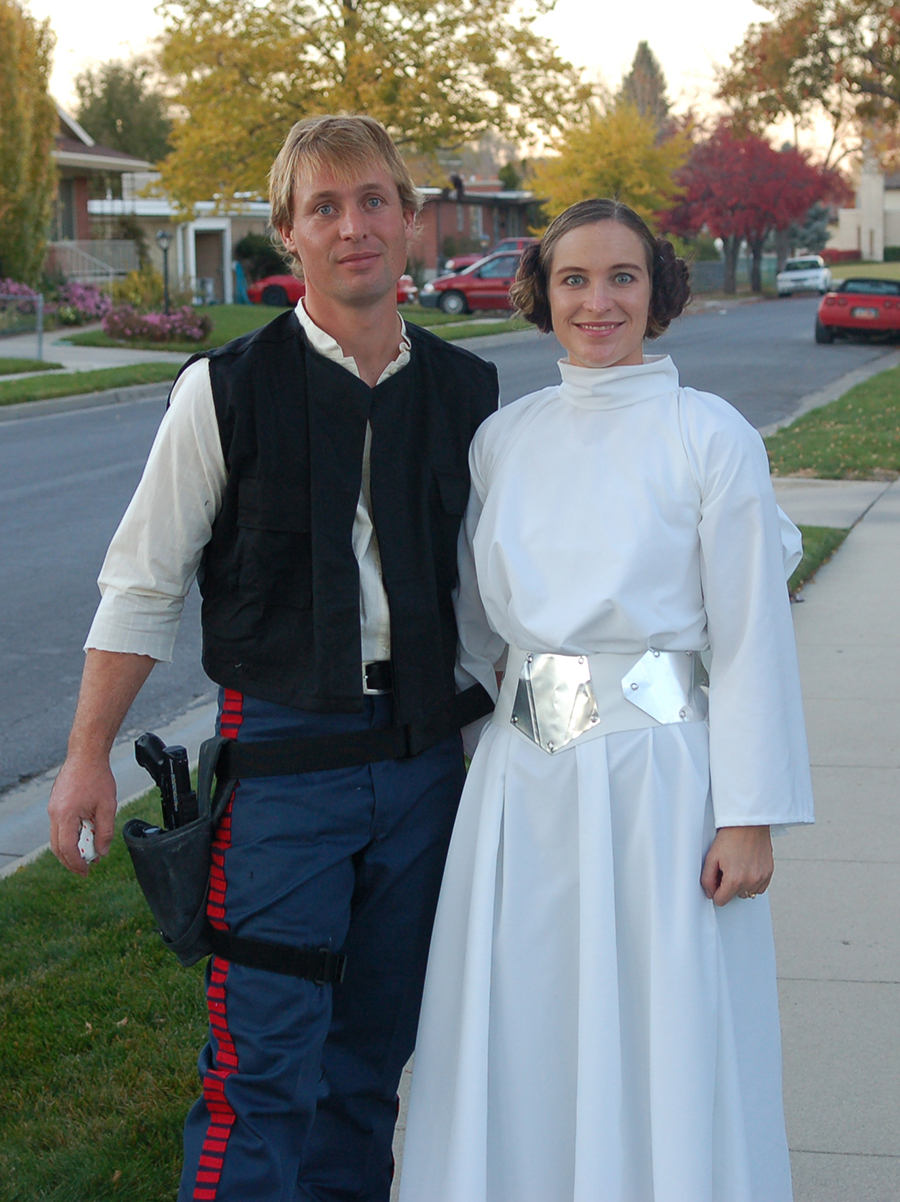 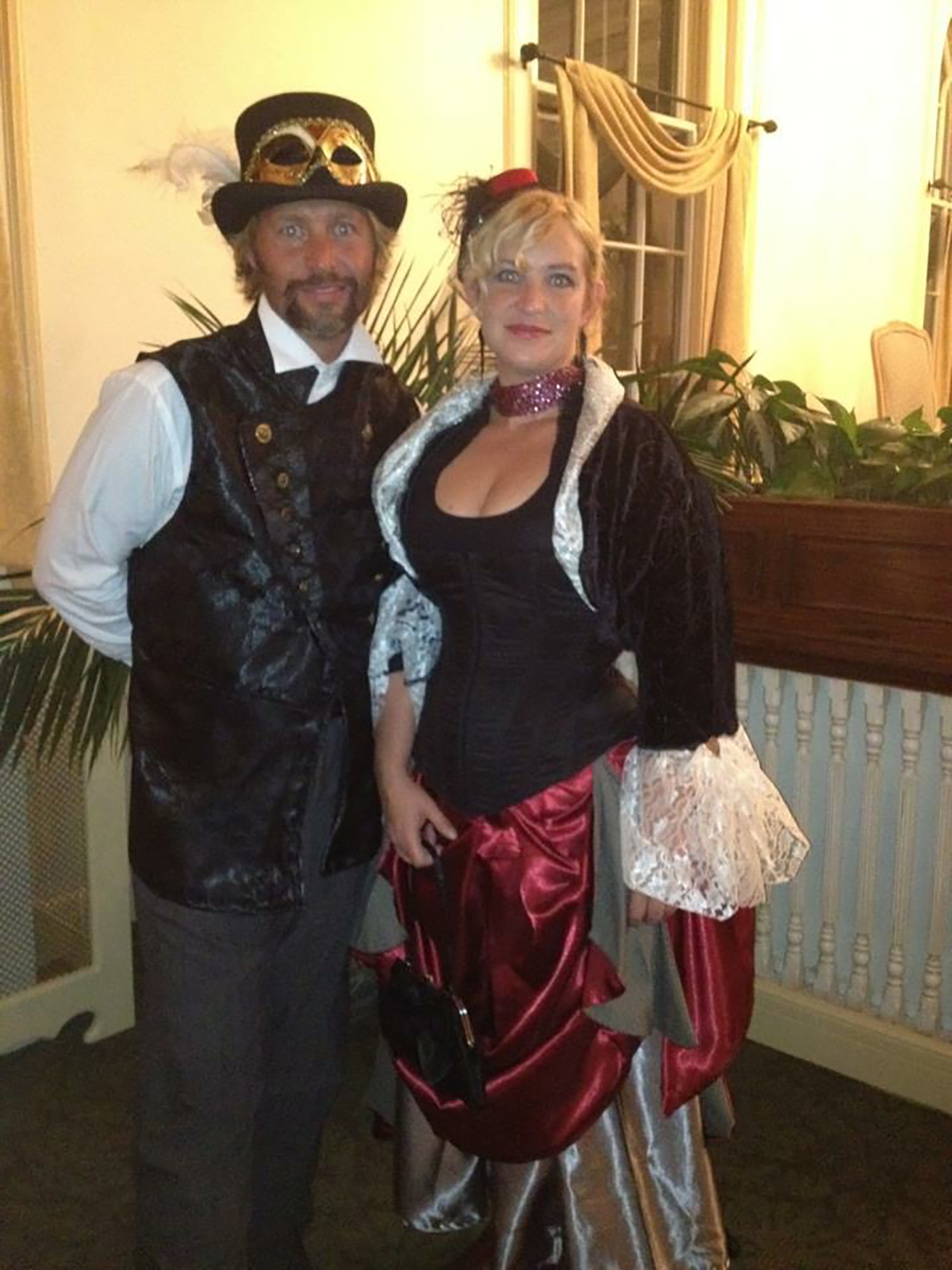 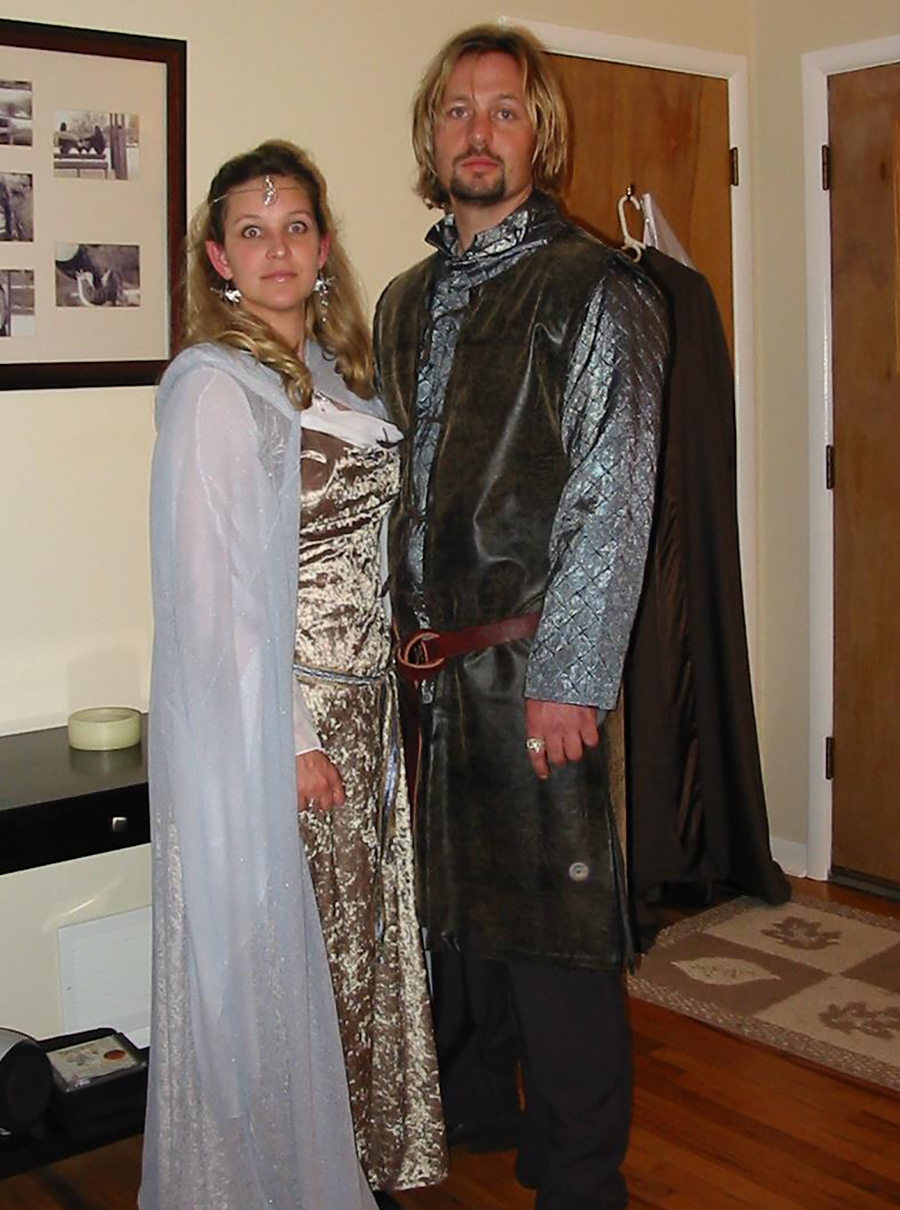 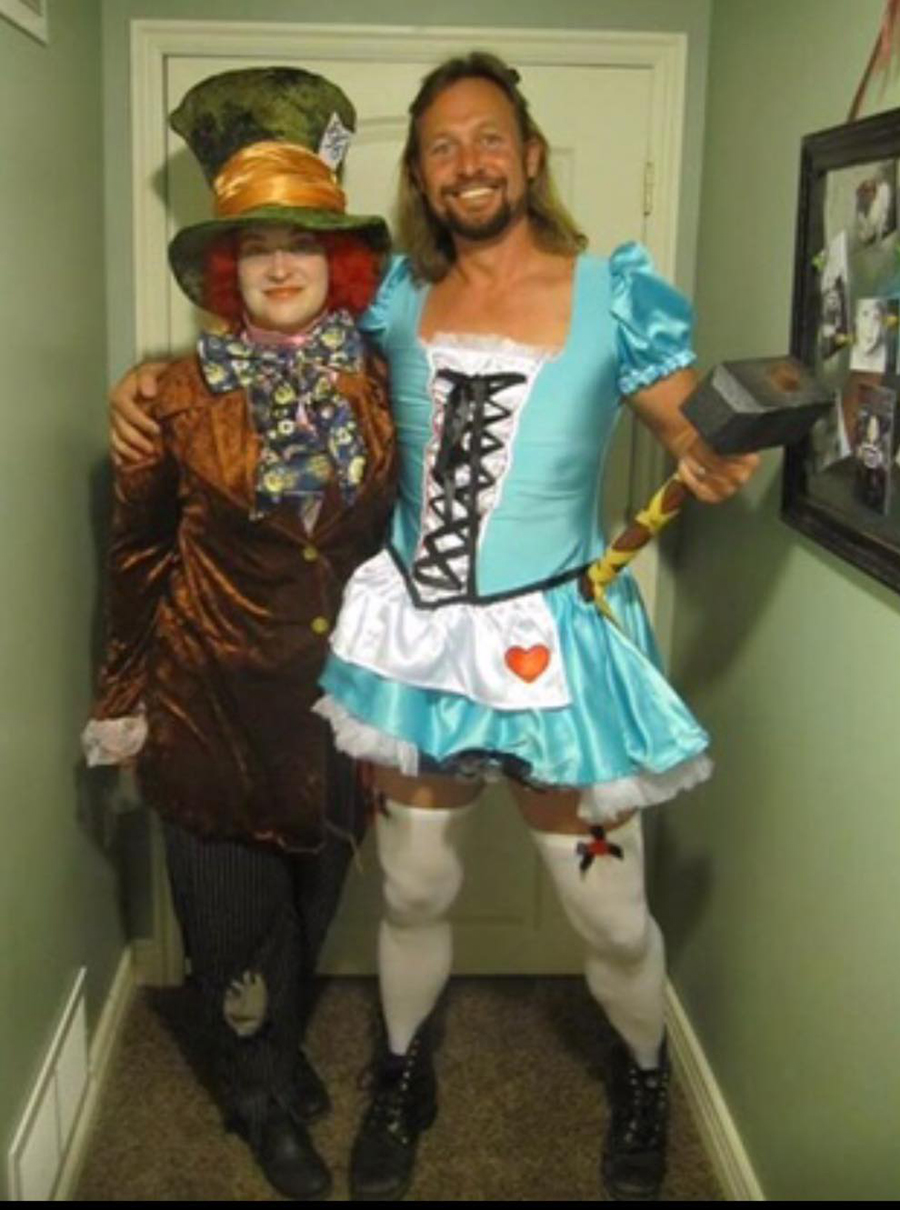 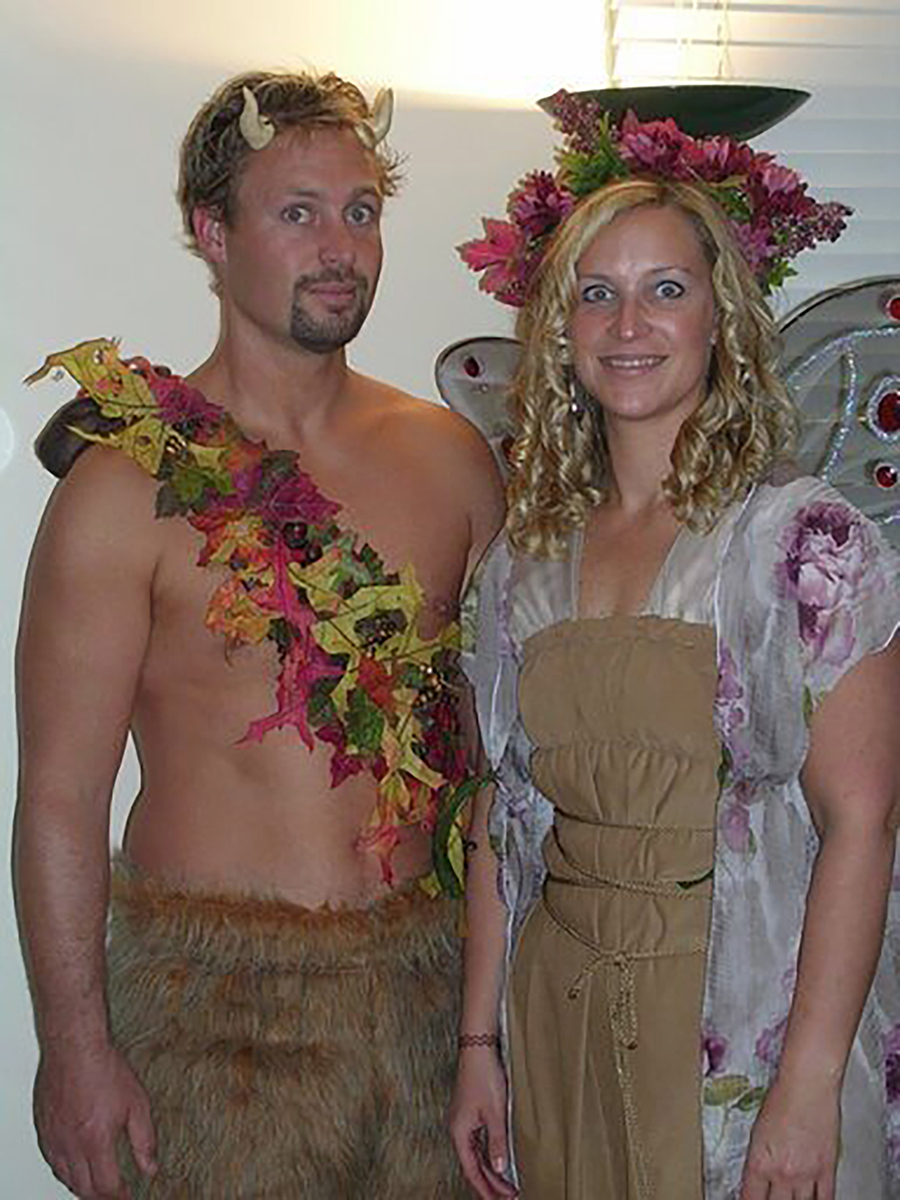 Caprice Post and her husband, Tom, dress up as Han Solo and Leia from "Star Wars." Post had to improvise after the blaster she ordered came in one-twentieth the size.
Post said she used about 15 yards of denim and other materials to make the skirt and bustle for her steampunk costume.
The Lord of The Rings costumes were Post's second favorite to make. Post dressed as Arwen and glued her ears to look like an elf.
Post said she and her husband swap gender roles a lot because it gets more votes. Here, she is dressed as the Mad Hatter and her husband, Tom, is dressed as Alice.
Post's favorite costumes were Puck and Fairy. Tom wore furry pants and goat horns (not pictured), and Post painted him with bronzer.

Now Post typically starts work on the costumes as early as July, or whenever she and her husband receive the invitation and decipher the puzzle that reveals the party’s theme. Once they know that, the couple decide whether to pick characters from a book or movie or invent their own. If they select a book, movie, or anything from pop culture, Post said she will do some research first.

“With movies, I’ll do screenshots of those characters to try to get the very closest I can to their costumes, because the costumes you buy don’t actually look like the costumes the actors wear. So, when we did steampunk, I watched a ton of steampunk movies to try to see what kind of costuming they do,” Post said. “With books, it’s easier because it’s written and you can use your imagination to make what you want.”

From there, it’s a trip to a fabric or secondhand store for patterns and materials — rugs, curtains, an armchair for its upholstery, handbags, whatever Post can unstitch and stitch back together. Post said she relies on swimsuits for colored Lycra, which helps make sleeves and corners fit nicely while adding flexibility.

“When we go to this party, we have activities to do. Sometimes it's walking a tightrope, sometimes it’s running, and sometimes it’s playing paintball in your costume,” she said. “So, it's important that you can wear the costume.”

While Post has found creative ways around most costuming challenges, she also has learned her limitations.

Post also buys many of the accessories, which she spends a lot of time trying to find in thrift shops and online. Those little details, she said, really make the difference when it comes to the costume contest, which is decided by popular vote.

The Posts also have found that swapping gender roles — e.g., Post as the Mad Hatter and her husband, Tom, as the title character from “Alice in Wonderland” — tends to improve their chances of winning.

“That gets more votes, always, because he's not a pretty woman," she said. "He's not a good cross dresser, so it's very incongruous.” 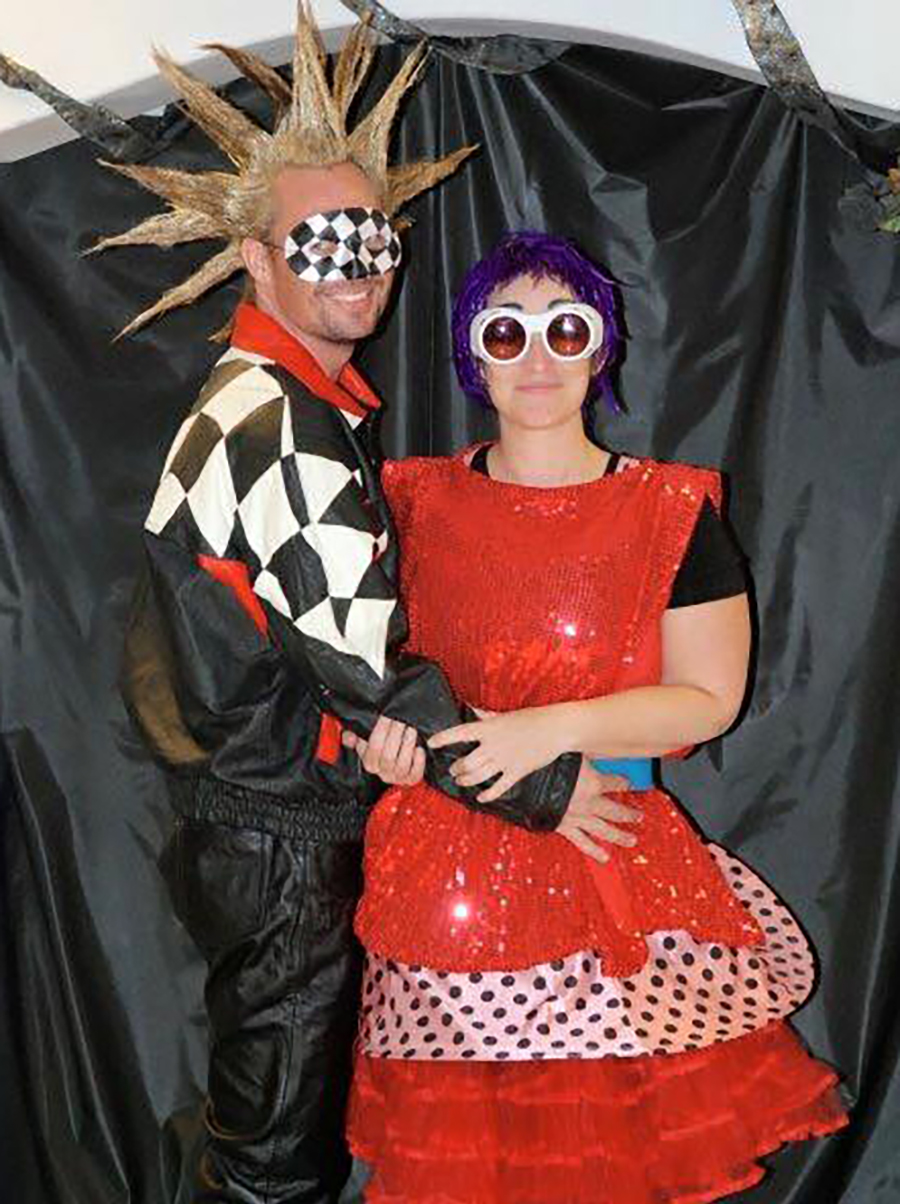 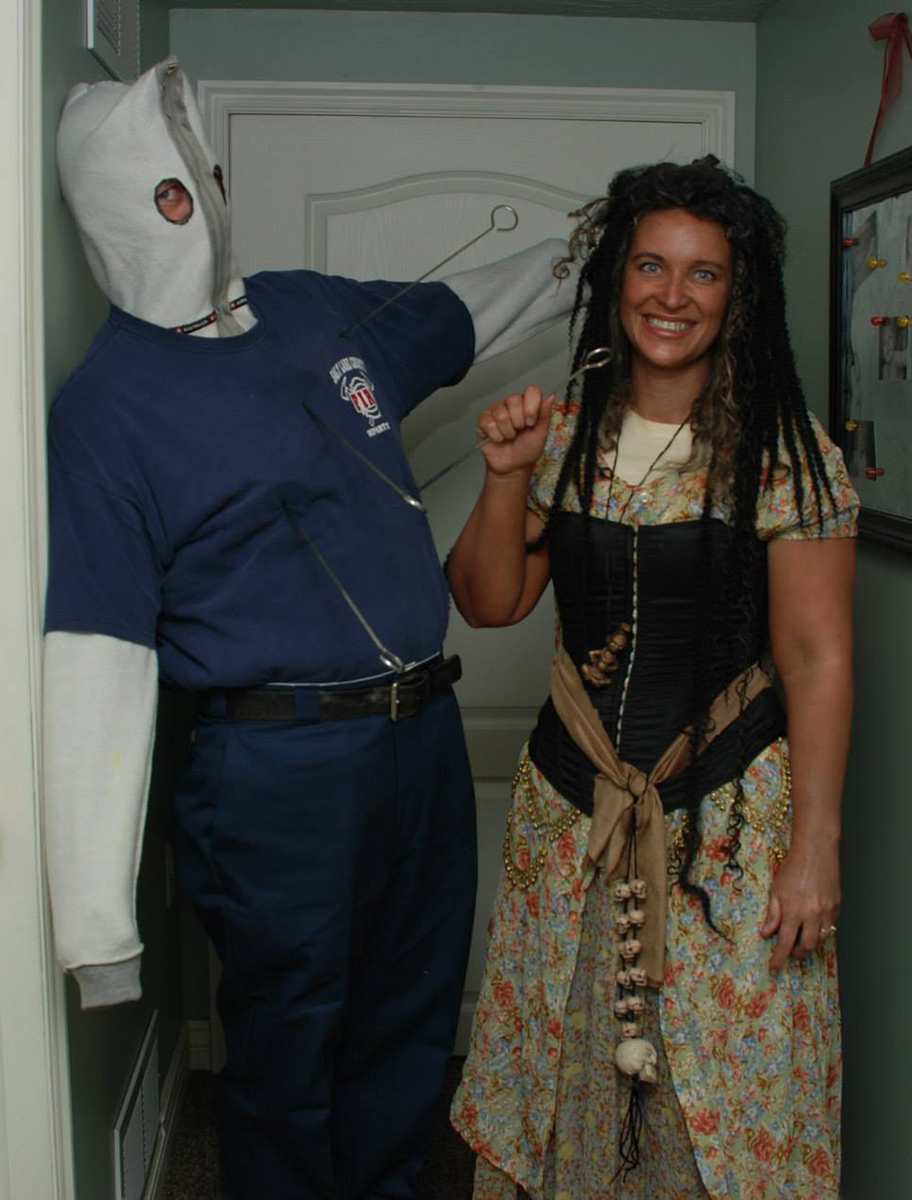 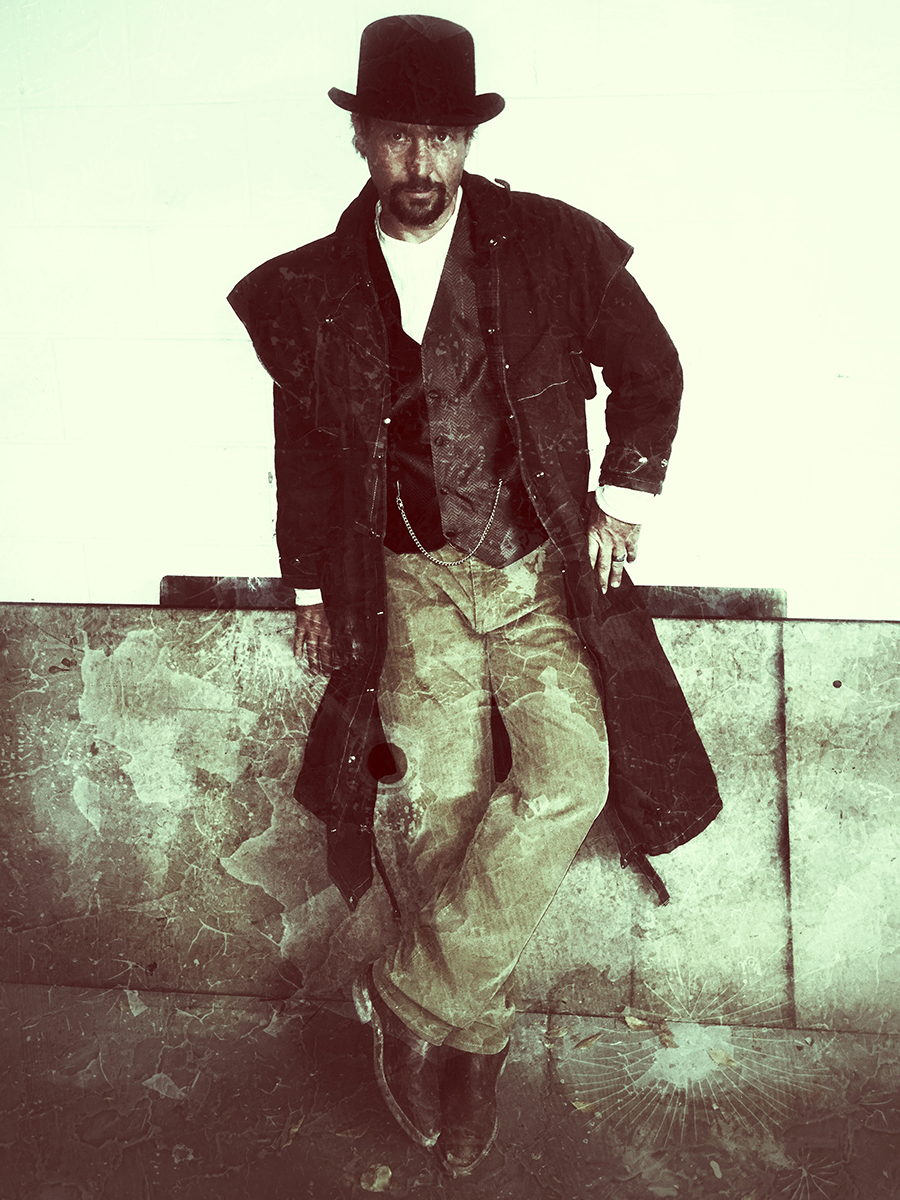 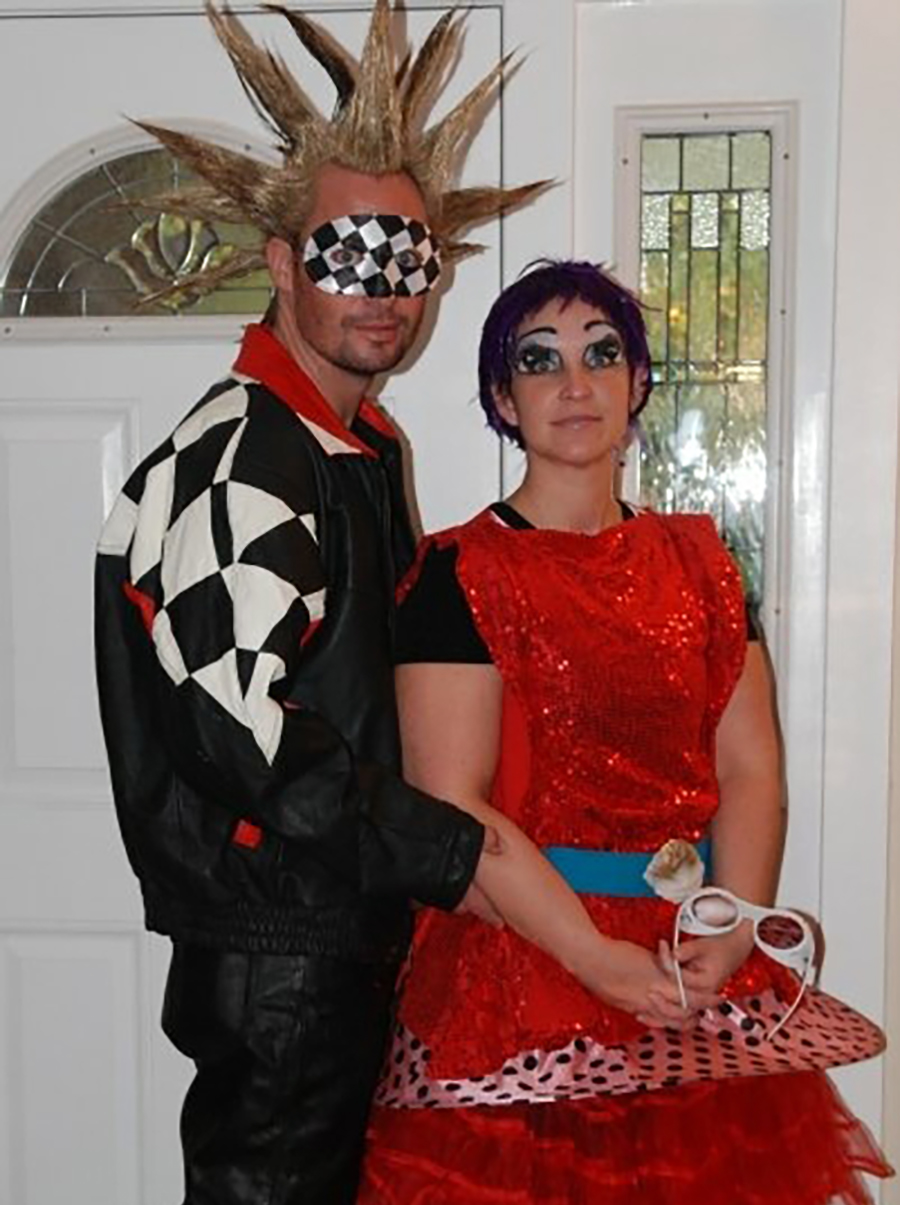 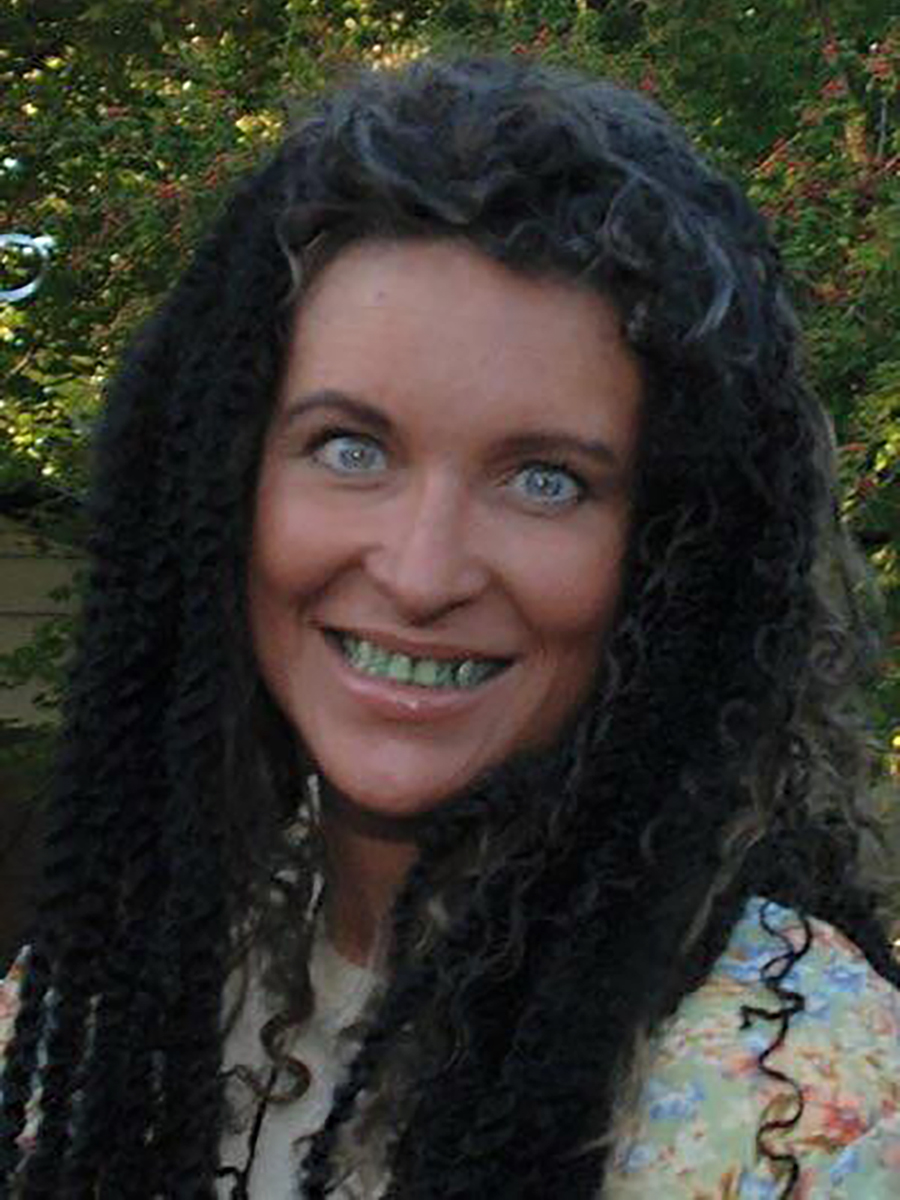 Post used glue and a blow dryer to make her husband's hair stand up straight for his anime look. It took a week to wash out.
Post borrowed clothes from her firefighter uncle to make the costume for her husband, who was a voodoo doll.
Tom is an actor, so playing dress up is nothing new for him. But for Halloween, he always wants to make sure they have fun doing it.
Although she put a ton of effort into the makeup for her anime costume, Post said they did not win the costume contest that year.
Post prefers to dye her hair rather than wear a wig, like she did with her voodoo costume. She said wigs are exhausting and itchy.

Even when she gets a head start on the costumes, a couple of hours here and there usually isn’t enough to get them done early. Sometimes she has to work a weekend or through the night for two or three days to finish the costumes — and hers is always the last one.

“If my husband’s is good, he can still be in the contest and I can sit it out. … He's even more competitive than I am, and I'm pretty competitive.”

In addition to the time commitment — the couple often spends the entire day getting ready for the party — Post also puts a lot of money into purchasing materials for their costumes. And although they’ve won the costume contest 15 times — and the money from the $20 entry fees, as well as a skull named Bob that passes from one winner to the next each year — Post said she’s never made enough to cover her costs.

But it’s still worth it.

“For me, it's the opportunity to get to be your favorite characters, whether fiction, historical, you know, whatever it may be. It’s fun just to have these cool characters and to get people to laugh and say, ‘Oh, my gosh, that's amazing!’”