American Indian Resource Center becomes USS' first partner in the effort to match indigenous and other underrepresented students, alumni with IT jobs

This article is part of a Node 4 series featuring equity, diversity, and inclusion programs in UIT. Watch for upcoming articles featuring other UIT efforts, including those in the Chief Technology Officer organization and the Information Security Office.

While UIT has increasingly become more diverse in the past decade, with more benefits-eligible staff from underrepresented communities employed than ever before, some leaders recently noticed that the organization still struggles to attract and retain people of color, women, and other diverse backgrounds.

Now University Support Services (USS) is working on an equity, diversity, and inclusion jobs initiative to address it.

The efforts began last summer after a discussion about recruitment during a USS directors meeting. Deputy Chief Information Officer Ken Pink said he and his directors began to question whether they had been doing a good job of reaching a diverse slate of candidates for USS job openings.

“Somebody pointed out that [USS] hasn't had a Black applicant since 2015, and we have never had a Native American applicant that we know of,” Pink said. “So, I asked, ‘Could that be true of other [UIT] areas?’ And they said, ‘We don't know.’ So, my comment was, ‘Why?’”

“We want a good, diverse team, but if we can't get applicants, it doesn't matter,” he said.

As of 2017, the last year for which University of Utah staff data was made public, the Division of Human Resources reported that the race/ethnicity of 405 benefits-eligible UIT employees was

The data does not include information for part-time or student employees. Since the HR site does not categorize data by UIT unit, it’s not possible to provide specific information about USS staff. 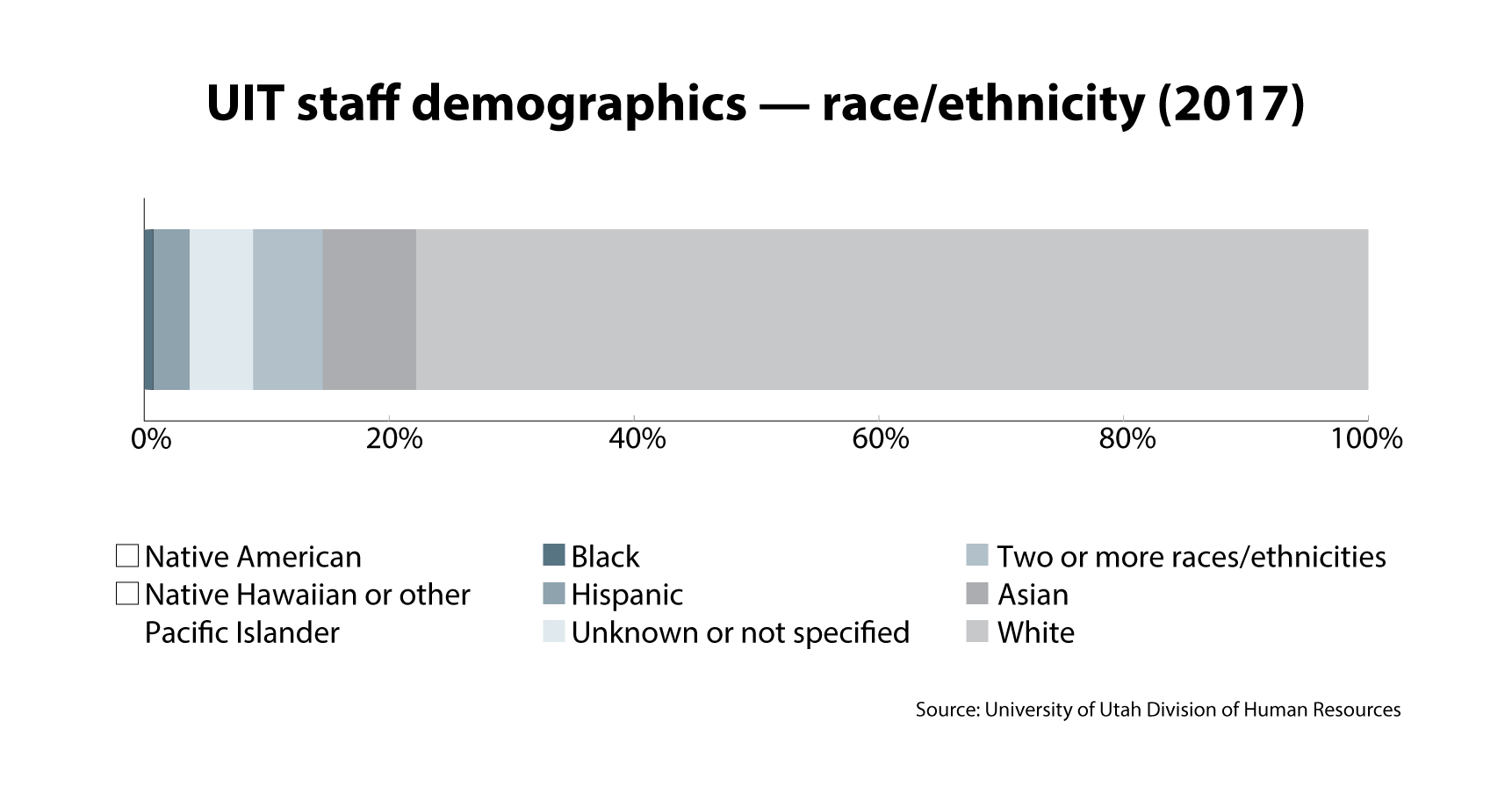 A plan and a partnership

Shortly after the discussion, Pink enlisted the expertise of Dr. Mary Ann Villarreal, the inaugural vice president for Equity, Diversity, & Inclusion (EDI), who spoke with USS leadership and connected him with the directors of the University of Utah’s American Indian Resource Center (AIRC) and Black Cultural Center (BCC). He also tasked Shenia Sellers, administrative manager for USS department operations, with developing a strategic plan to improve equity, diversity, and inclusion in the USS organization, with a focus on recruitment and retention.

Sellers said her work at the Rape Recovery Center in Salt Lake City helped inform her approach to the strategic plan, which outlines three key steps: create a committee of USS staff and campus allies; identify potential barriers in the hiring process and culture; and identify and implement solutions.

The volunteer committee, she said, will include a student, at least one full-time employee, an associate director, a director, Strategic Planning and Process Team Interim Associate Director Chalimar Swain, and herself. She’s also in the process of building relationships with campus leaders, including EDI directors and UIT’s Human Resources representatives.

“Figuring out who can I approach for resources and help, and to bounce back ideas was very important to me,” she said.

Per Villarreal, AIRC Director Franci Taylor jumped at the opportunity to provide input and partner on an EDI jobs initiative.

Currently, less than 1% of U students self-identify as American Indian or Alaska native (AI/AN), Taylor said. Of those, about 31 students are enrolled in computer science or a similar major, and might be interested in information technology jobs. Depending on the job, other students she knows might be interested, too.

“I have students come in constantly looking for internships and part-time positions,” she said, adding, “The No. 1 issue for American Indian students is lack of funding for education, housing, food, and other expenses, so they need part-time jobs or internships.”

Currently, USS posts open positions on the U’s employment portal and job search website Indeed. Pink noted that while IT professionals have often used Indeed as a recruiting pathway, he recognizes that some underrepresented groups may not use the site for job searches.

“Unless that [information] gets filtered down to somebody like me, they've never even heard the positions are out there,” said Taylor, who noted that many people don’t know about the AIRC, which works to increase American Indian student visibility and success on campus by providing and advocating for programs and tools to enhance academic success, promote personal wellbeing, and develop leadership skills.

Based on Taylor’s feedback, Sellers now emails Taylor fliers that highlight open positions and plans to create a list that identifies which majors historically thrive in the USS organization. Her conversation with Taylor helped her see that, “with the proper training, anyone can have a career in computer science or STEM.”

Taylor said she will distribute the job descriptions to students with IT-related majors, minors, or interests, encouraging them to apply if they meet the basic requirements.

“And then anybody who reaches out [to USS or UIT] is more likely to funnel into UIT programs,” she said.

USS typically hires 10-12 student positions a quarter, Pink said. The entire UIT organization may employ more than 100 students at any given time. The pay is competitive, with the possibility for merit raises, the hours are flexible, and students receive real-world training and frequent feedback.

Pink also wants to promote full-time job openings. Under the current university-mandated hiring freeze, however, he feels that his team can make more of an impact recruiting students.

“We're not hiring a lot of people right now, but we still are replacing students, and quite frankly on the USS side, most of our vacated full-time positions, we fill with interns,” he said. “We rarely go outside — occasionally — but our norm is to promote from within.”

“We do track this a little bit. If you start with us as a student, and you are hired full time later on, you tend to stay a lot longer than if I hire you from another company,” he said.

While Sellers aims to continue fostering that environment, she also wants to build a culture that increases retention among the BIPOC+ (Black, Indigenous, and people of color) staff whom USS recruits.

“If we don’t address how we can retain staff from these communities, our [EDI hiring] efforts won’t really mean much.”

One idea is improving the onboarding process, which Sellers called “instrumental to the success of our employees, regardless if they stay here for a couple of years or for the majority of their career.”

“We should set the tone for those incoming staff about our values, which are that we welcome and encourage people to bring their experiences, their diversity, and their personal history.”

Sellers would also like to identify culture advocates within USS who can welcome and support new employees, particularly across different teams so people don’t feel so siloed, and to better support existing staff.

“We don't want inclusion by exclusion — that's never the goal,” she said. “It's more about creating an environment where people feel comfortable to bring their previous and very unique experiences, which can affect how we work and the results that we put out as USS.”

Now that she’s drafted a strategic plan, Sellers said the next step is forming the equity, diversity, and inclusion committee. She plans to enlist volunteers by the end of November and start working on recruitment and retention efforts right away.

They’ll have a head start, thanks to some early conversations with campus leaders. So far, Pink and Sellers have been in touch with Villareal and Taylor, and Sellers plans to meet with more EDI team members. She’s also working with Amy Tolman and Nicholas Loomans, UIT’s HR representatives.

With their help, the committee and USS leadership will evaluate and update the department’s job descriptions, hiring process, organizational policies, and support systems for people of color and women.

As an example, Taylor suggested reading the job posts and determining the target applicant. If it sounds perfect for a middle- to upper-class white man, then “there's probably language that's a barrier,” she said. She recommended reviewing the description and noting at the beginning of every job posting a desire for and commitment to a diverse workforce.

“You need to put it up front: We want to break down barriers; we want to create opportunities for a population, a capture zone, that has previously not been accessed; we are serious and dedicated to expanding our bubble to be inclusive.”

She also recommended that hiring managers familiarize themselves with other populations’ social and cultural norms and protocols. For instance, she said, some American Indians may not feel comfortable looking into the eyes of someone they don’t know well because that can be considered invasive and a form of disrespect. Some also do not use a firm handshake, as that can be seen as aggressive.

“Be aware of different cultural protocols, and don’t mark the candidate down if they don't comply with what the interviewer thinks is the norm. Do some cultural competency or empathy training,” Taylor said. “…  In most job interviews, there's a pretty singular linear perception of what is appropriate and what's not. So become more open-minded and just give a diverse population the benefit of the doubt.”

Although the USS-AIRC partnership on the EDI jobs initiative just got underway, Taylor is excited about the collaboration and opportunity to connect American Indian students with IT jobs.

“They'd be more than willing to come to campus to work,” she said.

While Pink can’t guarantee anyone jobs, he’s invested in improving USS relationships and recruiting efforts to attract and hire from more BIPOC+, female, and other diverse applicants — a commitment the rest of the UIT organization shares, Chief Information Officer Steve Hess said.

“It's the job of the university to educate our students and ensure that they are ready to go into the workforce,” Pink said. “And that's one of the big focuses of the student intern program, and it's not a terrible thing for our full-time roles either, to make sure that we expand our footprint.”

Learn more about the Office of Equity, Diversity, & Inclusion, including its resource centers. Learn more about EDI’s Friday Forums on Racism in Higher Education and Reframing the Conversation series.